After watching a moving onstage performance, many budding singers have one thing on their mind – they want to sound like that. To sound that pitch perfect, they need to get themselves the best wireless microphone. With so many choices out there, it's hard to figure out which one will give them crystal clear beauty.

You don't want to wander around a store, trying to figure out which is the best. You want to go armed with real deal info to help you make the best decision for you. Well, we've got the scoop to do just that, so you can pick the best microphone and put that performance we talked about to shame.

What Is a Wireless Microphone?

To fully appreciate the wonder that is a wireless microphone, let’s first look at what a traditional microphone is.

A microphone, also called a mic, is an ingenious device that picks sound vibrations in the air and converts them into electronic signals. The electronic signals channel through a cable to a preamp or mixer. Then, the output signal can be amplified or recorded onto a storage medium.

A wireless microphone does away with that cable.

These are the ones that most people think of when you talk about wireless mics. Handheld wireless microphones are your typical dynamic microphone that comes with a built-in transmitter.

These are small wireless mics that are usually worn on a lapel or hidden under clothes. Because of their size, they don’t have a built-in transmitter but come with a transmitter pack. They're common for guests on news shows and in other interview situations.

Head-worn mics are the type you usually see being used by Zumba instructors or by some pop singers. Like lavalier mics, these come with a separate transmitter pack.

Where to Find the Best Wireless Microphone

Fortunately, finding the best wireless microphone for your studio or project is not as difficult as it seems. You can get an excellent one on all major online stores, from a music or electronics shop near you, or even directly from the manufacturer website.

Before we go shopping for the best wireless microphone, let’s quickly look at the pros and cons of wireless mics.

There’s nothing as unsightly as a stage, set, or studio littered with intertwining cables. Thankfully, with wireless microphones, you can reduce the clutter associated with cables. It also gives your set a professional look.

One of the biggest disadvantages that comes with wired mics is that cables can easily get damaged, which can lead to poor sound quality -- or even cause bodily harm. That necessitates the frequent replacement of damaged cables, which in itself can be costly.

Cabled mics have the advantage of being easier to use as all you have to do is plug them in. With wireless microphones, you have to search for a suitable frequency. It also makes troubleshooting a wireless mic trickier.

Apart from battling with frequency, with a wireless mic, you’ll also have the problem of changing batteries. That's something that can be inconvenient and can also cost you regarding sound quality when the batteries are going flat.

Let’s get a few burning questions concerning wireless microphones out of the way. That way, you can make your decision with as much information as possible.

Are wireless microphones as durable as wired ones?

When it comes to sensitive equipment like microphones, their lifespan depends on one major factor – how you handle them. That said, the durability of a microphone, wired or wireless, is also dependent on build quality. That is why you need to consider this when buying a mic.

Is the sound quality on wireless microphones as good as on wired ones?

Now that we’ve cleared all that, you’re now ready to get yourself a wireless mic. And not just any wireless mic, but the best wireless microphone to suit your budget and needs. 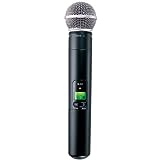 Shure has been in the audio equipment space for a long time. That’s a sure testament to the fact they make products people are happy with. One such product is one of the best handheld mics on the market -- the Shure SLX2/SM58.

The Shure SLX2/SM58 is a handheld wireless microphone that consists of the Shure’s renowned SLX transmitter paired to the iconic SM58 cardioid microphone capsule. Operating in the 518Hz to 782Hz frequency range, and coming with easy automatic setup, this is one of the best units in its category. One of the SLX2’s best features is that the transmitter design allows for you to interchange microphone cartridges easily.

As for the Shure SM58 microphone, it does an amazing job of accentuating the warmth and clarity of vocals. That makes it one of the most loved mics for live performances. Feature rich, this wireless microphone comes with a timed backlit LCD, frequency and power lockout, and mute functionality. The mic also has an auto sleep function that will help you preserve your two AA batteries, which, by the way, can run for eight hours if you intend to use the mic continuously. It's one very conservative mic as far as power usage is concerned.

When it comes to budget-friendly, yet high-quality audio accessories, AKG is one company that has managed to serenade its users with amazing sounding equipment. One such is the AKG Perception Wireless 45 vocal set.

This wireless microphone has a lot going for it because it comes with an amazing HT45 transmitter paired to a large diaphragm condenser microphone, The first thing that will grab your attention is the gorgeous, futuristic design. And going beyond its beauty, you will find that it is also a powerful microphone, able to give you a whopping 70 to 20,000 Hz of frequency response. That's more than a lot of mics in its category can offer.

One of the best features you’ll find on this mic is the onboard gain control. It is especially helpful when using the mic in spaces prone to feedback as it allows the user to quickly reduce the volume on the mic and cut off the noise. Another attractive feature on the AKG Perception is the fact that it only runs on a single AA battery -- and yet manages to run for eight continuous hours.

A powerhouse in the audio equipment world, Sennheiser is one brand you can trust to bring you the best wireless microphone. This time, it comes in the form of the Sennheiser EW 100 G4-845.

The Sennheiser EW 100 G4-845 is a very sturdy and rugged wireless mic package that is trusted by professionals in every industry. And it's probably because it comes loaded with a lot of advanced features that make it, especially the receiver, extremely easy to set up and use. One such innovative feature is the way the receiver and the handheld unit connect through the use of infrared technology.

As for the mic, this set up comes with Sennheiser’s 845 dynamic mic that features a super-cardioid polar pattern. Practically, this translates to a mic that amplifies the sounds you want perfectly canceling any unwanted ambient noise. The mic is shock-mounted and also comes with a coil that helps reduce interference.

One of the reasons that endeared this mic to users in every nook of the radio and television industries is the compact size, which makes it very discrete. But don’t let its diminutive size fool you -- this is one powerful condenser microphone that captures sound exceptionally well.

With a frequency range of 40 to 20000Hz, a 90dB dynamic range, and an omnidirectional polar pattern, this mic is very sensitive and has low-self noise, features that enable it to take exceptional acoustic recordings. Another handy feature is that the Sony EMC77B can run on two different power sources -- AA batteries and phantom power. That gives the mic an edge over other lavalier mics.

Audio-Technica is another household name in the sound and audio equipment fraternity. It's known for producing exceptional audio solutions that rank among the best in many niches. And in the “best wireless microphone” category, one of their finest is the Audio-Technica PRO 70 cardioid condenser lavalier mic.

The cardioid polar pattern means it picks up sounds exceptionally well with the front part of the mic, while the sides are less sensitive. Sounds from the rear of the mic do not pick up at all. With a pickup angle of 120 degrees, the PRO 70 mic is perfect for one on one interviews and recording acoustic instruments, as it hardly picks up any environmental noise. 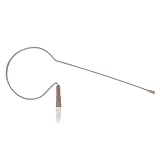 For the best wireless microphone as far as head-worn mics go, the Countryman E6 might just be it. The Countryman E6 is a very lightweight and ergonomic omnidirectional mic that is loved by many professionals -- singers and speakers alike.

Despite being small in size, this mic is big on sound. Loved for the crisp, clean, and clear sound, the E6 stands out among the rest. Add to that the fact that it handles wind and other challenges exceptionally well, and the Countryman E6 is one of a kind. Durability is also something you need not worry about as this pin-thin mic is more rugged than it looks. 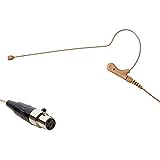 Airwave is a relatively new player in the audio equipment and accessories space, but they certainly are causing waves with their budget-friendly wireless mics. The Airwave HSD Slimline SE is one of them.

It features a dynamic capsule, as opposed to other iterations that use a condenser. The HSD Slimline SE gives a well-balanced sound that rivals that of industry leaders like Shure.

Which Is the Best Wireless Microphone for You?

With such a plethora of wireless mics to choose from, it can be a daunting task picking out one for yourself – even from a streamlined list like this one.

So which among these should you take onto the stage or to your studio?

Well, if you’re looking for an awesome value for money mic, the Airwaves HSD Slimline SE is a great option. The next best wireless microphone for you would be the Sennheiser EW 100 G4-845.

So go ahead, pick your mic and go out and do your thing – confidently.

The CAD U37 Reviewed: The Perfect Beginner Microphone